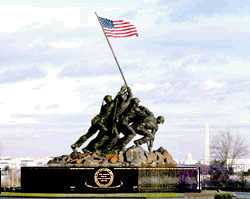 WELCOME TO THE MARINE CORPS LEAGUE ....DISPLAY CASES AND PICTURES....A PICTORIAL WALK INTO THE HISTORY OF THE "UNITED STATES MARINES" IS FEATURED HERE OF IWO JIMA.... COME VISIT US AT OUR LOCATION IN SCRANTON,PA.......COME BACK OFTEN FOR A VISIT , WE ARE FOREVER ADDING NEW ARTIFACTS TO YOUR MUSEUM...SEMPER FI

MARINES GOING ASHORE AT IWO JIMA ON 19 FEBRUARY 1945 Photo made by a Navy photographer who flew over the great armada in a search plane. The photograph was then flown to guam where it was transmitted by radio to San Francisco. Department of Defense Photo(U.S.Navy) #NH65311

"The battle of Iwo Island has been won. The United States Marines by their individual and collective courage have conquered a base which is as necessary to us in our contin-uing forward movement toward final victory as it was vital to the enemy in staving off off ultimate defeat. By their victory, the 3d,4th and 5th Marine Divisions and other units of the 5th Amphibious Corps have made an accounting to their country which only history will be able to value fully. Among the Amer-who served on Iwo Island, uncommon valor was a common virtue. " -Admiral Chester W. Nimitz

Iwo Jima, which means Sulfur Island, was strategically important as an air base for fighter escorts supporting long-range bombing missions against mainland Japan. Because of the distance between mainland Japan and U.S. bases in the Mariana Islands, the capture of Iwo Jima would provide an emergency landing strip for crippled B-29s returning from bombing runs. The seizure of Iwo would allow for sea and air blockades, the ability to conduct intensive air bombardment and to destroy the enemy's air and naval capabilities. The seizure of Iwo Jima was deemed necessary, but the prize would not come easy. The fighting that took place during the 36-day assault would be immortalized in the words of Commander, Pacific Fleet/Commander in Chief, Pacific Ocean Areas Admiral Chester W. Nimitz, who said, "Among the Americans who served on Iwo Island, uncommon valor was a common virtue."

Initial carrier raids against Iwo Jima began in June 1944. Prior to the invasion, the 8-square-mile island would suffer the longest, most intensive shelling of any Pacific island during the war. The 7th Air Force, working out of the Marianas, supplied B-24 heavy bombers for the campaign. In addition to the air assaults on Iwo, the Marines requested 10 days of preinvasion naval bombardment. Due to other operational commitments and the fact that a prolonged air assault had been waged on Iwo Jima, Navy planners authorized only three days of naval bombardment. Unfavorable weather conditions would further hamper the effects of naval bombardment.

Despite this, Turner decided to keep the invasion date as planned, and the Marines prepared for the 19 Feb D-Day. More than 450 ships massed off Iwo as the H-Hour bombardment pounded the island. Shortly after 9 a.m., Marines of the 4th and 5th Divisions hit beaches Green, Red, Yellow and Blue abreast, initially finding little enemy resistance. Coarse volcanic sand hampered the movement of men and machines as they struggled to moved up the beach. As the protective naval gunfire subsided to allow for the Marine advance, the Japanese emerged from their fortified underground positions to begin a heavy barrage of fire against the invading force.

The 4th Marine Division pushed forward against heavy opposition to take the Quarry, a Japanese strong point. The 5th Marine Division's, 28th Marines had the mission of isolating Mount Suribacbi. Both tasks were accomplished that day.

February 20, one day after the landing, the 28th Marines secured the southern end of Iwo and moved to take the summit of Suribachi. By day's end, one third of the island and Motoyarna Airfield No. 1 was controlled by the Marines.

At 8 a.m. on 23 Feb, a patrol of 40 men from 3d Platoon, E Company, 2nd Battalion, 28th Marines, led by First Lieutenant Harold G. Schrier, assembled at the base of Mount Suribachi. The platoon's mission was to take the crater at Suribachi's peak and raise the U.S. flag. The platoon slowly climbed the steep trails to the summit, but encountered no enemy fire. As they reached the top, the patrol members took positions around the crater watching for pockets of enemy resistance as other members of the patrol looked for something on which to raise the flag. At 10:20 a.m., the flag was hoisted on a steel pipe above the island. This symbol of victory sent a wave of strength to the battle-weary fighting men below, and struck a further mental blow against the island's defenders.

Marine Corps combat photographer, Private Bob Campbell, captured this image as the original flag was lowered, and its larger replacement was raised Marine Corps photographer Sergeant Lou Lowery captured this first flag raising on film just as the enemy hurled a grenade in his direction. Dodging the grenade, Lowery hurled his body over the edge of the crater and tumbled 50 feet. His camera lens was shattered, but he and his film were safe. Three hours later another patrol was dispatched to raise another, larger flag. The battle for Iwo Jima is encapsulated by this historic flag raising atop Suribachi, which was captured on film by Associated Press photographer Joe Rosenthal. His photograph, seen around the world as a symbol of American values, would earn him many awards including the 1945 Pulitzer Prize.

The 3d Marine Division joined the fighting on the fifth day of the battle. These Marines immediately began the mission of securing the center sector of the island. Each division fought hard to gain ground against a determined Japanese defender. The Japanese leaders knew with the fall of Suribachi and the capture of the airfields that the Marine advance on the island could not be stopped; however, they would make the Marines fight for every inch of land they won.

Lieutenant General Tadamishi Kuribayashi, commander of the ground forces on Iwo Jima, concentrated his energies and his forces in the central and northern sections of the island. Miles of interlocking caves, concrete blockhouses and pillboxes proved to be one of the most impenetrable defenses encountered by the Marines in the Pacific.

The Marines worked to drive the enemy from the high ground. Their goal was to capture the area that appropriately became known as the "Meat Grinder." This section of the island included: the highest point on the northern portion of the island, Hill 382; an elevation known as "Turkey Knob," which had been reinforced with concrete and was home to a large enemy communications center; and the "Amphitheater," a southeastern extension of Hill 382.

The 3d Marine Division encountered the most heavily fortified portion of the island in their move to take Airfield No. 2. As with most of the fighting on Iwo Jima, frontal assault was the method used to gain each inch of ground. By nightfall on March 9, the 3d Division reached the island's northeastern beach, cutting the enemy defenses in two.

On the left of the 3d Marine Division, the 5th Marine Division pushed up the western coast of Iwo Jima from the central airfield to the island's northern tip. Moving to seize and hold the eastern portion of the island, the 4th Marine Division encountered a "mini banzai" attack from the final members of the Japanese Navy serving on Iwo. This attack resulted in the death of nearly 700 enemy and ended the centralized resistances of enemy forces in the 4th Division's sector.

A proud moment for those who worked so hard to gain control of the island was when the first emergency landing was made by a B-29 bomber on 4 March .

Operations entered the final phases 11 March, enemy resistance was no longer centralized. Individual pockets of resistance were taken one by one. Finally on 26March, following a banzai attack against troops and air corps personnel near the beaches, the island was declared secure. The U.S. Army's 147th Infantry Division assumed ground control of the island on 4 April , relieving the largest body of Marines committed in combat in one operation during World War II.

Historians described U.S. forces' attack against the Japanese defense as "throwing human flesh against reinforced concrete." In the end, Iwo Jima was won not only by the fighting spirit of the Marines, but by the meticulous planning and support provided by the Navy and Army through supply efforts, medical care, and air and naval gunfire. Twenty-seven Medals of Honor were awarded to Marines and sailors, many posthumously more than were awarded for any other single operation during the war.

Over the years, the flag raising has come to symbolize the spirit of the Corps to all Marines. On November 10, 1954, a bronze monument of the flag raising, sculpted by Felix de Weldon and located in Arlington National Cemetery, was dedicated to all Marines who have given their lives in defense of their country. Then Vice President Richard M. Nixon said, "This statue symbolizes the hopes and dreams of America, and the real purpose of our foreign policy. We realize that to retain freedom for ourselves, we must be concerned when people in other parts of the world may lose theirs. There is no greater challenge to statesmanship than to find a way that such sacrifices as this statue represents are not necessary in the future, and to build the kind of world in which people can be free, in which nations can be independent, and in which people can live together in peace and friendship."

WWII Marines on the landing beaches of Iwo Jima, Mt. Surabachi in the backgound. 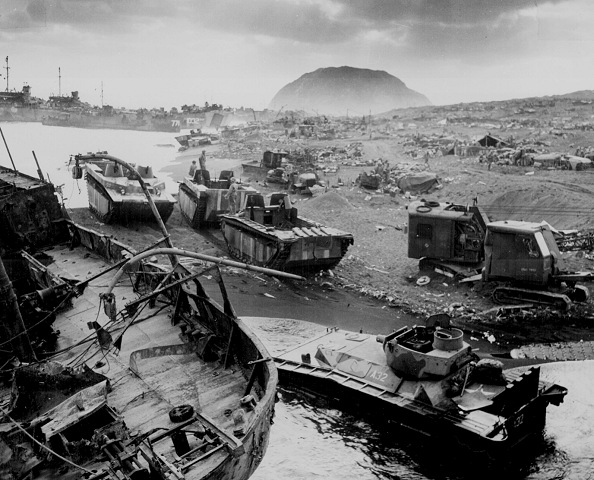 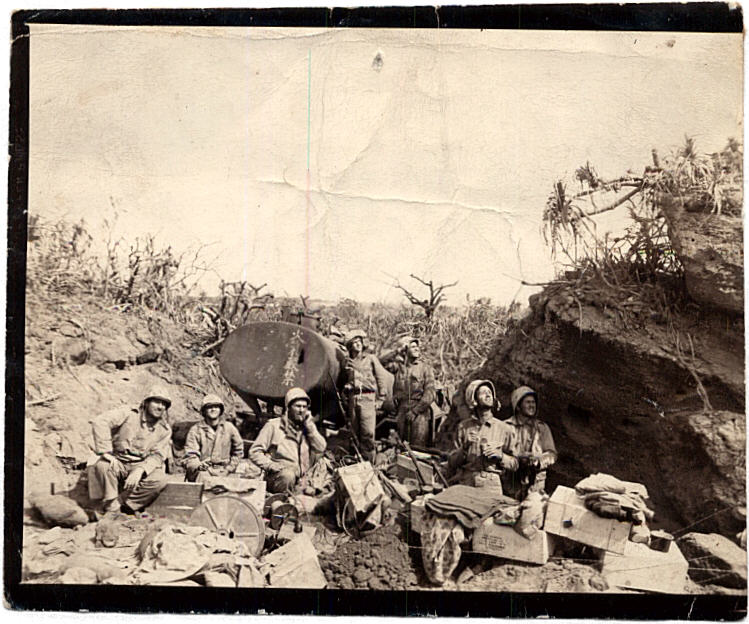 Taken during the Iwo Campaign. Can't identify those in it, tho we think the second from right is our Dad, George S Bound, Sr, I-3-13, 4th Div.