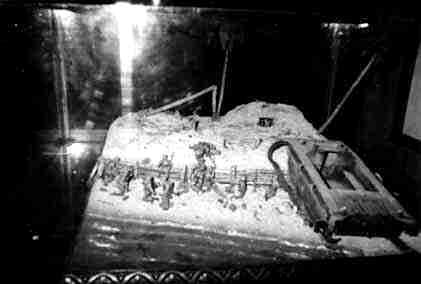 Museum Display of Landing at Tarawa

WELCOME TO THE MARINE CORPS LEAGUE MUSEUM..... A PICTORIAL WALK INTO THE HISTORY OF THE "UNITED STATES MARINES" IS FEATURED HERE OF DIFFERENT ERAS. OR COME VISIT US AT OUR LOCATION IN SCRANTON,PA.......COME BACK OFTEN FOR A VISIT , WE ARE FOREVER ADDING NEW ARTIFACTS TO YOUR MUSEUM...SEMPER FI

THE ROAD TO TARAWA

At the Quebec conference in August of 1943, the Allied high command announced it's intention to launch an offensive in the Central Pacific, in the drive towards Japan. A prime objective of this drive, to be undertaken as a Navy-Marines operation, was to take the Marshall Islands. The Marshall Islands would serve as an air base from which further operations could be launched against the Marianas, and from there against the Japanese home islands. But 500 miles to the southeast of the Marshalls, an archipelago of atolls called the Gilberts stood between U.S. forward ground air bases and the Marshalls. The Gilberts had only one workable airstrip for refueling American aircraft and that was on the island of Betio in the western Gilbert Island atoll of Tarawa. The Japanese commander in charge of the defense of Tarawa, Rear Admiral Keiji Shibasaki, said "A mission men cannot take Tarawa in a hundred years." He commanded 2,600 imperial marines, the best amphibious troops in the Japanese armed forces. With the importation of 1,000 Japanese workers and 1,200 Korean laborers the island airstrip of Betio had been transformed into one of the most formidable fortresses in the world, boasting 14 coastal defense guns(four of which were taken from the surrendered British garrison at Singapore), 40 strategically located artillery pieces, covering every approach to the island, a coconut-log sea wall four feet high lining the lagoon and over 100 machine gun emplacements behind the wall. All this was concentrated on an island only a mile long and a few hundred yards wide. Meanwhile an armada of 17 carriers, 12 battleships, eight heavy and four light cruisers, 66 destroyers and 36 transports carrying the 2nd Marine Division and a part of the 37th Infantry Division- some 35,000 soldiers and Marines headed for Betio in early November of 1943. In the moments before pre-invasion bombardment began, the task force naval commander, Rear Admiral Howard F. Kingman announced to the landing troops "Gentlemen, we will not neutralize Betio. We will not destroy it. We will obliterate it!" Neither Shibasaki nor Kingman knew what they were up against.

On November 20th at 2:15 A.M. the marine transports went to General Quarters. Last minute landing preparations were made and the marines received their last rites. At 5:05 A.M. the first battleship let loose a salvo on Betio's coastal batteries, followed shortly thereafter by the other battleships and destroyers in the task force. The shelling stopped only for enough time to let the dive bombers from the escort carriers pound the island. The first wave of amphtracks and Higgins boats moved in on the lagoon side of Betio. The formation was jolted to a stop 500 yards out by a reef which the amphtracks could climb over only with great difficulty. Simultaneously, a hail of fire opened up from the island, incinerating the lodged and incoming boats as well as mowing down the marines wading ashore. Few of the first wave survived. But a few got through, and with the help of four successive waves the marines established a beachhead up to a four foot sea wall. By nightfall, the marines were pinned down on a stretch of beach 100 yards long and 20 feet inland. And rather than being obliterated, the Japanese marines had barely been scratched by the naval and air bombardment. While a brief respite between bombardment and the landings had occurred, the Japanese rushed to their gun posts and had delivered devastating fire. But because their communication lines had been cut, none of them knew what was going on. Therefore, according tot the Bushido Code, each isolated soldier or group of soldiers was obliged to either fight to the death or commit suicide unless ordered otherwise. Consequently, Japanese resistance was fanatical. Some Japanese swam out to disabled amphtracks that night and poured fire onto the marines from the rear- silenced only at great cost to the marines. And a lone Japanese seaplane-turned-bomber easily inflicted casualties on the concentrated beachhead. In all, the first day on Betio had been very costly for the 2nd Division- amphtracks and Higgins boats littered the lagoon, wounded marines everywhere, and dead bodies and parts of bodies everywhere: out of 5,000 men, 1,500 were dead or wounded.

At the beginning of the second day, three marine battalions held a small foothold on Betio's lagoon beach. They were ordered to attack at 6:00 A.M. while the 2nd Division reserves, the 1st and 3rd battalions of the Eighth Marines were brought up to the reef. As the Japanese defenders opened up on the wading-in marines, Colonel Shoup of Major Crowe's battalion at the far east side of the lagoon ordered a desperate attack to halt the slaughter of incoming marines. Only 450 of the 800 incoming men made it to the beach. But with this fresh reserve, the central battalion punched its way inland, across the airstrip, and seized a part of the island's sough shore. Meanwhile a high tide flooded the lagoon, allowing reinforcement boats to pass over the reef and come directly up to shore. The arrival of tanks in support of all three battalions on the beachheads proved critical that day. The tanks rolled up to the front lines, taking out Japanese pill boxes and other fortifications at close range. By dusk, the 6th Marines, after having secured the nearby island of Makin, paddled over the reef in rubber boats and landed on the western beach. There, they met up with Major Ryan's ravaged western lagoon assault battalion. Reinforced, and having gained ground, the second day came to an end. Marine Colonel Shoup radioed the daily situation report back to the command ships: "Casualties: many. Percentage dead: unknown. Combat efficiency: we are winning." Meanwhile, Admiral Shibasaki was sending his last radio message to Tokyo: "Our weapons have been destroyed. From now on everyone is attempting a final charge. May Japan exist for ten thousand years!"

On the third day, all three battalions moved inland, with the 1st Battalion, 6th Marines sweeping up the southern shore of Betio. With infantry and flame thrower support, tanks blew apart the remaining fortifications in the central and western part of the island. Taking out pill boxes, machine gun nests and snipers took up much of this third day. But by nightfall, the marines held western and central Betio. At twilight, Shibasaki's troops made one final courageous 'Banzai' suicide charge. They rushed the 6th Marines, Company B in almost overpowering numbers. The marines began to break. Lieutenant Thomas phoned Major Jones, saying "We are killing them as fast as they come at us, but we can't hold much longer; we need reinforcements." Jones replied, "We haven't got them to send you; you've got to hold." In the face of heavy losses, the 6th Marines wavered, but didn't break. When dawn appeared, the marines still held their positions.

On the morning of November 23rd, the 6th Marines counted 300 Japanese bodies scattered around their positions. As it turned out, this group of Japanese had been the last large contingent on Betio with only small pockets of resistance remaining. And following a painstaking mop up of the eastern side of the island, Japanese resistance, with the exception of a few snipers who would continue to take pot shots at marines for the next several days, came to an end. For at 1:12 P.M., after 76 hours of fighting, Betio was declared 'secure'. Upon arriving at Betio that day, General Holland Smith ordered both the Stars and Stripes and the Union Jack to be raised over Betio(for Betio was to revert to the British as a Pacific trust after the war). The general then toured the island west of the airport. He noted that only seventeen Japanese had surrendered while only 129 Korean laborers had survived out of a total of 4,700 troops and construction workers.

THE VALUE OF TARAWA

In the 76-hour fight for Betio, 1,056 marines and sailors were killed, died of wounds or were missing and presumed to be dead. Some 2,300 men were wounded, but recovered. Meanwhile, at home, Americans were appalled by the losses at Tarawa, flooding Admiral Nimitz's mail with angry letters. But Tarawa had taught the navy and the marines some vital lessons in amphibious warfare which in the near future, would save thousands of lives. More amphtracks were to be built with better armor, including side protection for marines. Higgins boats were removed from landing operations. Landing craft were converted into supporting gunboats, able to come in close on the beach. Underwater demolition teams were organized to destroy natural and artificial obstacles before future atoll landing would take place. Precision rocket and naval attacks had proven their worth against the near impregnable fortifications. And the role of the tank in turning the tide of battle proved critical. All these lessons would be applied to future campaigns with great success. The price for Betio had been relatively high, but within days, Betio was converted into a forward base for the assault on the Marshalls, with bomber and fighter sorties flying out within hours of the marines victory. And within nine weeks of the battle, an invasion task force under Admiral Nimitz left Tarawa to take the Marshall Islands.

THE MCL BUILDING WAS BUILT IN 1936 BY W.P.A., THE COMPLETION OF THE MUSEUM WAS 1982. YOU WILL FIND THE MUSEUM LOCATED INSIDE THE MARINE COPRS LEAGUE BUILDING. ALL DIORAMAS WERE BUILT BY "JERRY MAUS SR.". MR MAUS WHO SERVED WITH THE UNTIED STATES ARMY, HAD GREAT RESPECT FOR THE MARINE CORPS...........OUR THANKS AND APPRECIATION GOES TO "MR. JERRY MAUS SR.".